Bitterness is a taste that is detected mostly by the back part of the tongue. It is a sensation that grows more pleasurable with age.  The sensation of bitterness can be modified by other senses. Aroma, in particular, can enhance perceived bitterness.

Bitterness is an essential flavor characteristic of a beer. Taste testing will give an indication of the bitterness of a finished beer. However it is important for  brewers to have a quantitative, objective measurement of the degree of bitterness of beer., hence the use of the International Bitterness Units (IBU) scale. From these results, they are able to decide whether any process changes are needed. Also they can choose to add or remove hops. In addition they may determine to add Isomerised Alpha Acid to adjust bitterness.

In the 1950s and ’60s, the brewing community banded together to create the International Bitterness Units (IBU) scale. The scale was the solution to an issue brewers had with the hops they were using, where alpha acids were decreasing between harvest and brewing.

A beer with a high IBU value is not necessarily an indication of intense hop flavor, which is a common misconception. 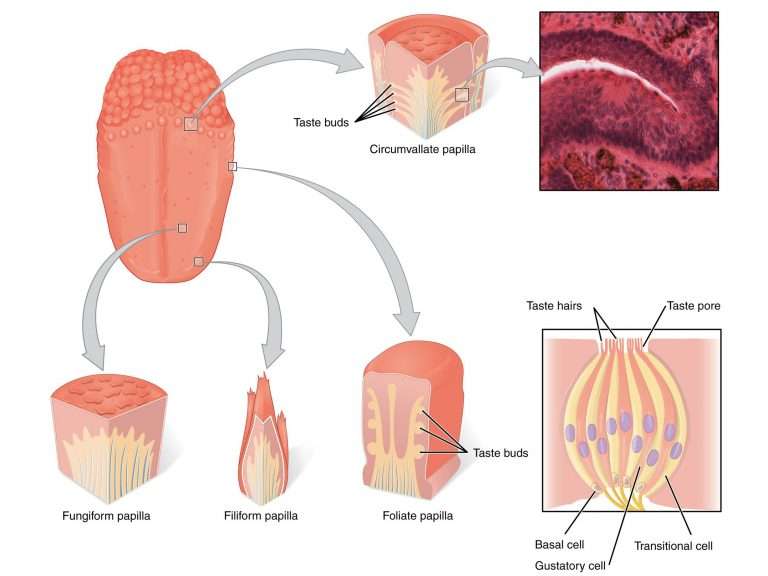 The tongue is covered with thousands of small bumps that are called papillae, that are visible to the naked eye. Within each papilla are hundreds of taste buds. The exception to this is the filiform papillae that do not contain taste buds. There are between 2,000 and 5,000 taste buds that are located on the back and front of the tongue. Others are located on the roof, sides and back of the mouth, and in the throat. Each taste bud contains 50 to 100 taste receptor cells.

Taste receptors in the mouth sense the five taste modalities: sweetness, sourness, saltness, bitterness and savoriness (known as savory or unami). Scientific experiments have demonstrated that these five tastes exist and are distinct from one another. Taste buds are able to distinguish between different tastes through detecting interaction with different molecules or ions. Sweet, savoriness, and bitter tastes are triggered by the binding of molecules to G protein-coupled receptors on the cell membranes of taste buds. Saltiness and sourness are perceived when alkali metal or hydrogen ions enter taste buds, respectively.

Bitterness is one of the most sensitive of the tastes, and many perceive it as unpleasant, sharp, or disagreeable, but it is sometimes desirable and intentionally added via various bittering agents. Common bitter foods and beverages include coffee, unsweetened cocoa, South American mate, coca tea, bitter gourd, uncured olives citrus peel, some varieties of cheese, many plants in the family Brassicaceae, dandelion greens, horehound, wild chicory and escarole. The ethanol in alcoholic beverages tastes bitterr, as do the additional bitter ingredients found in some alcoholic beverages including hops in beer and gentian in bitters.

Bitterness is of interest to those who study evolution, as well as various health researchers since a large number of natural bitter compounds are known to be toxic. The ability to detect bitter-tasting, toxic compounds at low thresholds is considered to provide an important protective function. Plant leaves often contain toxic compounds, and among leaf-eating primates there is a tendency to prefer immature leaves, which tend to be higher in protein and lower in fiber and poisons than mature leaves.

Perceived bitterness is the bitterness we actually taste. This is complex as the bitterness level tasted changes by the individual and sweetness. The IBU scale is not based on perceived bitterness but the iso-alpha acids present. Hops are just one ingredient in beer, and the bitterness they provide can be masked by other flavors in the beer, like malt, which is sweet. For this reason, looking at the IBU number alone doesn’t always help identify how bitter a beer will taste.

As the beer’s malt profile increases so do the amounts of residual sweetness in the beer. This sweetness balances out the bittering acids, making it taste, well, less bitter. Think of this like a cup of black coffee. Black coffee can be perceived as bitter; as you add sugar, it balances out the bitterness. The coffee still contains the original level of bitterness; it’s now just masked by the sugar’s sweetness. This concept is why an American Pale Ale with 40 IBUs and a minimal malt character taste significantly more bitter than an Oatmeal Stout with 40 IBUs and a higher malt profile.

One of the primary uses (if not the most important use) of hops in beer brewing, is to contribute bitterness to the flavor. Hops have been used for centuries as the prime bittering agent in beer, but hops have not been the sole or original bittering agent for beer, as a variety of different herbs were used far before the use of hops became popularized.

Bitterness is usually thought of as an acquired taste, i.e. something you get used to and learn to like, and bitterness perception also varies from person to person, as some can be more sensitive to it compared to others. It is also usually agreed upon that humans have through evolution learned to become alert to bitter food, as it may be a sign of poison or a possible dietary danger, and hence very bitter beers can usually be very off-putting to a person that is not used to the flavor.

Female hop cones and their soft resins rich in α-acids (cohumulone, humulone, adhumu-lone) and β-acids (colupulone, lupulone, adlupulone) are used in brewing. The major bitter compounds in beer are iso-α-acids. The ratio of trans/cis stereoisomers for standard beers is close to 3:7 beers 3, or 68:32 in favor of the cis-compounds. The half-life of cis-compounds is approx. ﬁve years, and of trans-isomers is about a year.

The isomerized α-acids are intensely bitter, and they represent the typically bitter beer taste. Their concentrations range from 15 (American lagers)–100 ppm (bitter English ales). However, bitter taste in beer is modiﬁed with residual sugars and results in pleasant bitterness for the consume]. Isomerized α-acids have tensioactive properties, which stabilize the beer foam, and they act inhibitory to Gram-positive bacteria, while lactic acid bacteria in beer exhibit resistance to iso-α-acids.

The major contributors to hop bitterness in beer are isomerized alpha-acids, however it has been found that these are not the only compounds that contribute to the bitterness (others include products derived from beta acids and polyphenols).

The type of alpha-acid also presumably influences the quality of bitterness, as it is generally believed that iso-cohumulone contributes a harsher and more unpleasant bitterness compared to iso-humulone.

The term "auxiliary bitter compounds in hops" refers to all bitter compounds in the hop resin that are transferred to the beer and are not iso-α-acids. This includes all such components found in fresh hops and excludes those formed through oxidative aging reactions.

There are numerous auxiliary bitter compounds found in hops that are either present in a directly soluble form in hops or are formed from α-acids and β-acids during the wort boiling process. The majority of these substances are considered desirable from a sensory perspective. They mask a harshness and lingering character of the bitterness and make a positive contribution to the quality and harmony of the bitterness in beer. 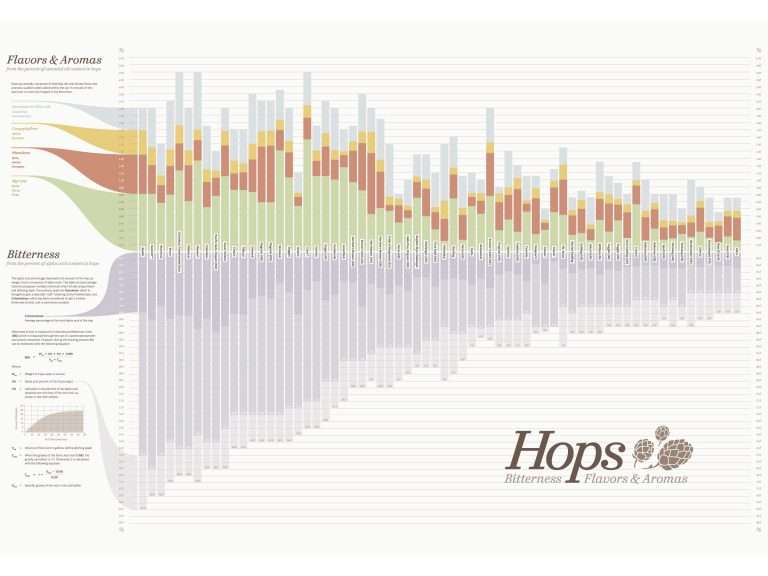 The International Bitterness Units scale, or simply IBU scale, provides a measure of the bitterness of beer, which is provided by the hops used during brewing.Technically an IBU is a measurement of the amount of absorption of light at 275 nm (abbreviated as A275nm) in a liquid, multiplied by 50, or, more precisely, 51.2, was found to provide a good approximation to the concentration of isomerized alpha acids in typical beer of the 1950s and 1960s when the IBU measurement was developed.

The IBU Scale starts at 0 for beers with no bitterness (fruit and sour beers), and goes all the way up to 120 for highly–bitter beers (Imperial IPA and Barley Wines), since the human palate can’t really detect a difference past that.

The European Bitterness Units scale, often abbreviated as EBU, is a bitterness scale in which lower values are generally "less bitter" and higher values "more bitter". The scale and method are defined by the European Brewery Convention, and the numerical value should be the same as that of the IBU), defined in co-operation with the American Society of Brewing Chemists (ASBC). However, the exact process of determining EBU and IBU values differs slightly, which may in theory result with slightly smaller values for EBU than IBU. 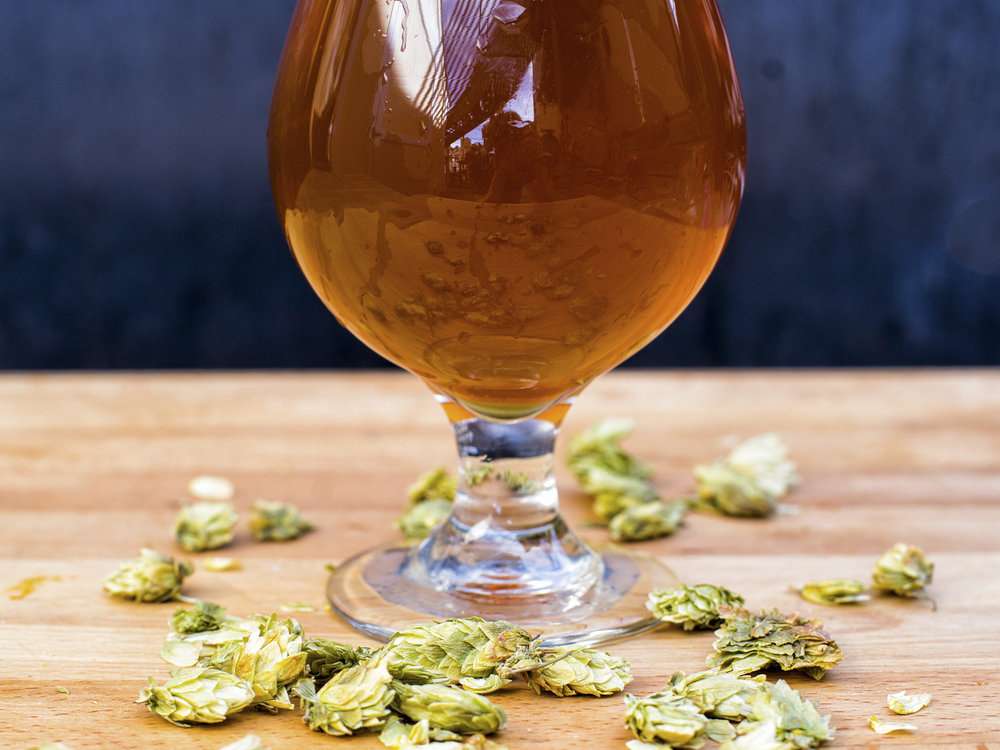 The protocol for the IBU scale was agreed to in 1967, originating from the 1964 study “The Measurement of Bitterness in Beers” conducted by the Isohumulones Sub-committee of the American Society of Brewing Chemists (ASBC) and the Analysis Committee of the European Brewing Convention (EBC).

At that time there were two differing methodologies for the measurement for bitterness both of which had been in use since 1955, the Rigby method and the Meilgaard method:  Lloyd Rigby from Canadian Breweries Ltd. First practical & quick method for determining “iso-compounds” in beer or wort. Rigby wanted to measure only “iso-compounds” and assumes the interfering compounds were not important;  Morten Meilgaard from Carlsberg Laboratories, assumed all hop derived compounds contribute to bitterness — especially oxidation products formed during aging of hops, and wanted to include them all.

The committees concluded that it was highly undesirable to have two distinct sets of units for bitterness in beers when these units agree only at 28 and diverge increasingly on each side of this figure. Therefore both Societies have decided to adopt the Rigby & Bethune units as the basis for all measurements of bitterness in beers and to designate these "International Bitterness Units." In America they were originally known as “Isohumulone Bitterness Units,”. 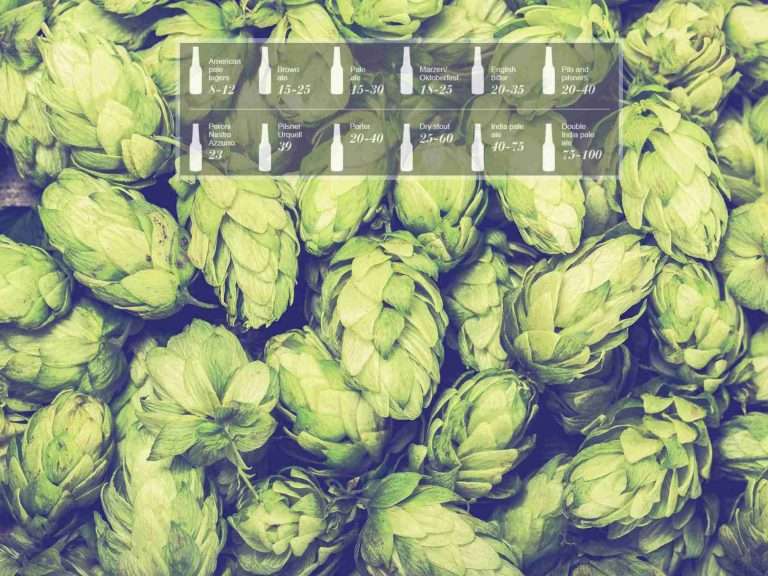 How IBUs are Determined

Beer bitterness, measured in International Bitterness Units (IBU), or the almost identical European Bitterness Units (EBU), is a measure of the absorbance of a solvent extracted sample of beer at 275 nm (A275nm) and measured with a spectrograph. The absorbance is of course dependent on the amount of isomerized alpha-acids present in the sample. 1 IBU approximately converts into to 0.7 ppm iso-alpha-acid, though this depends on the presence of other bittering compounds.

The IBU assay is carried out by first acidifying a sample of beer with HCl (dilute hydrochloric acid) to make the bittering acids more hydrophobic, then adding twice the volume of 2,2,4-trimethylpentane (also known as iso-octane). The mixture is then shaken thoroughly for 15 minutes, to allow as much of the (now hydrophobic) acids to transfer to the organic phase. The absorbance of the trimethylpentane phase (organic) is then measured at 275 nm in an ultraviolet spectrophotometer (against a blank). The measured absorbance is then multiplied by 50 to convert into Bitterness Units.

The UV-spectrophotometer uses discrete wavelengths of light to determine the concentration of certain compounds in a sample. The basic premise is that specific wavelengths of light will be absorbed by substances across a certain distance. The more light absorbed, the more “stuff” there is in the sample. The American Society of Brewing Chemists (ASBC) have developed procedures and standards to find certain compounds in beer, including iso-alpha acids for bitterness, polyphenols, and free amino nitrogen. Operating a UV-spec is easy, even for the uninitiated. Sample preparation is definitely the most challenging part, although the difficulty level varies by test.