Brewers, especially home brewers, tend to talk a lot about gravity. Not the type of gravity that keeps us firmly planted on the Earth, but the gravity of their beer recipe. This includes the beer’s specific gravity, original gravity, and final gravity.

Brewers measure gravity throughout the brewing process to estimate how many sugars can be converted to alcohol. In the end, these calculations are used to determine the beer’s final strength (its alcohol by volume or ABV).

Gravity measurements, or ‘specific gravity readings’ are made at key points throughout the wort-making and fermentation process; prior to boiling the wort (“pre-boil gravity”), immediately prior to pitching the yeast (“original gravity”), and post-fermentation (“final gravity”). These readings are usually taken using a  hydrometer or refractometer.

Original Gravity (OG), sometimes called original extract, is a measure of the solids content originally in the wort, before alcoholic fermentation has commenced to produce the beer. OG is one of the major measurements used by brewers to determine the future alcohol content of a beer fermented from a particular wort. It is measured by a saccharometer, hydrometer, or refractometer as the density of the wort at standard temperature and pressure (STP; usually 20°C and 760 mm) at the final collection point before the yeast is added. Original gravity is expressed as the density above that of distilled water and in the UK is called the excess gravity. Water is deemed to have a density at STP of 1.000. If the wort density is 1.048, it will have 48° of excess gravity and an OG of 48.

Specific Gravity, sometimes called present gravity, is the density of beer or wort at standard temperature and pressure (20°C, 760 mm Hg) measured by saccharometer, hydrometer, or refractometer. A more accurate laboratory method is by weight using a specific gravity bottle. The units of specific gravity follow the practice of the country for original gravity, namely excess gravity, degrees Plato, degrees Balling, etc. In the case of unfermented wort, the specific gravity is the same as the original gravity. For fermenting wort or beer it is more correctly the apparent specific gravity that is measured by a saccharometer because the alcohol being lighter than water reduces the actual reading given by the floating bulb.

Alcohol has a specific gravity substantially lower than water. This means the “true” or “real” extract is greater than that measured directly, hence the term “apparent extract.”

Attenuation involves the removal of sugars and production of alcohol by yeast during fermentation such that the wort becomes less dense and viscous and is thus thinned-out or attenuated. The use of the hydrometer or saccharometer for measurement of attenuation during a fall in specific gravity of fermenting wort was introduced to brewing in late 18th-century England.  Determination of temperature, brought in a few years earlier, and gravity measurement were the first quantitative process control measures made available to the brewer.

Real Extract (RE) is a precise calculation concerning the gravity of beer. It is related to a boiled wort’s gravity, a fermented wort’s attenuation, and a finished beer’s alcohol level. The specific gravity of wort—its density—is greater than that of water, which sets the mark at 1.000 because of the presence of sugars in solution. Gravity is commonly measured in terms of original gravity or degrees Plato (°P). A standard beer may have an original gravity of 1.048 or 12°P. As beer is being fermented—or attenuated—its gravity decreases because sugars are converted into carbon dioxide gas, which largely escapes, and alcohol, mostly ethanol, which mostly stays in the beer.

Attenuation is thus the extent to which wort sugar has been converted to alcohol. If a beer has plenty of residual sugar after fermentation, it has a lower attenuation value than a beer from the same-gravity wort with next to no residual sugars. If the difference in gravity between the starting wort and the finished beer is measured using a hydrometer, this attenuation value is misleading, because the wort gravity is measured based on sugar dissolved in a reference liquid of water only. The beer gravity is measured based on residual sugars dissolved in a reference liquid that is both water and alcohol. This is significant, because alcohol has a lower density (or gravity) than water. Thus, the difference between the hydrometer readings of wort gravity and of finished beer gravity lead to a value called apparent attenuation—“apparent” rather than actual, because it contains a small error.

Alcohol has a specific gravity substantially lower than water. This means the “true” or “real” extract is greater than that measured directly, hence the term “apparent extract.”

Real Degree Of Fermentation (Rdf) measures the degree to which sugar in wort has been fermented into alcohol in beer, defined as “attenuation.” A sweet beer has more residual sugar and lower attenuation. The RDF expresses the percentage of extract that was fermented. RDFs in the 50s represent full-bodied beers with over 40% of their original extract left unfermented, whereas RDFs in the 80s represent highly attenuated beers with less than 20% of their original extract unfermented. Mouthfeel is largely determined by RDF percentage; the higher the RDF percentage, the lighter and drier the beer. Conversely, a beer with a lower RDF percentage may have a round and even syrupy mouthfeel. The term “real” in this instance separates this measurement from those that are “apparent.” Because alcohol is lighter than water, a sample of beer may “appear,” when a hydrometer is used, to have lower residual sugar than it actually does. 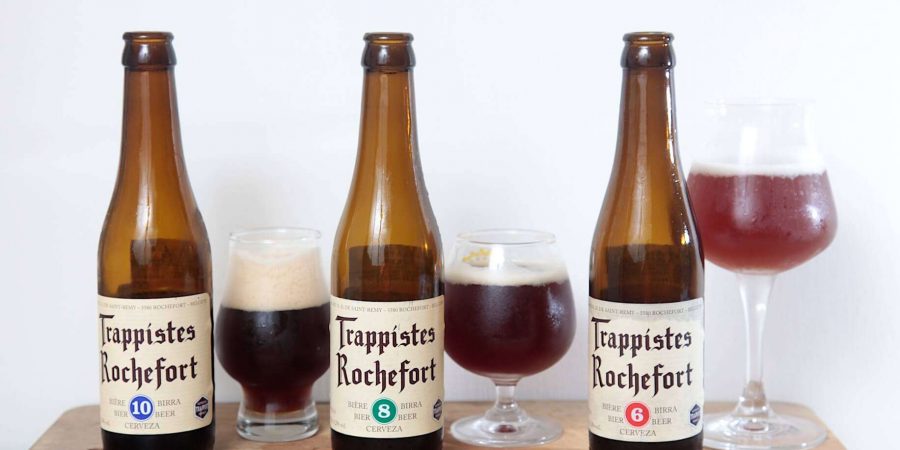 Belgian Brewing Degrees are an obsolete calculation of the gravity of beer stipulated by Belgian law for the payment of taxes. It was developed as a practical way to analyze both regular and acidic (lambic and other sour style) beers, as the presence of acid led to errors in other methods. Until the early 1990s, many Belgian breweries still used the Belgian gravity scale, but it has largely fallen out of favor with the Plato scale’s increasing prevalence. There are a number of Belgian beers, however, that are still named after their original gravities expressed in Belgian degrees, for example, Rochefort 6, 8, and 10.

Belgian brewing degrees were calculated after performing three analyses on the beer. First, the residual extract (n) of the beer was measured by distilling off the alcohol and analyzing the weight of the residual material left in the liquid. Using the standardized Doemens–Plato conversion table, this was converted to degrees Plato. Second, percent alcohol by weight (A) was measured by analyzing the specific gravity of the distilled alcohol from the beer sample. Using a standardized alcohol conversion table, the amount of alcohol in a 100-gram sample was determined. Third, the acidity or volatile acid content (c) of the beer was measured using standard titration techniques with alkali. Knowing n, A, and c, the original gravity (p) of the beer being analyzed was calculated as: p=n+2A+1.5c

The original gravity obtained was converted to specific gravity by means of a Doemens–Plato conversion table. The factor 0.0013 was then subtracted. Finally, Belgian brewing degrees were obtained from the second decimal place of the resulting number. For example, if the final number calculated was 1.0641, the official Belgian brewing degrees would be 6.41. Tax and beer classifications were then based on this number. 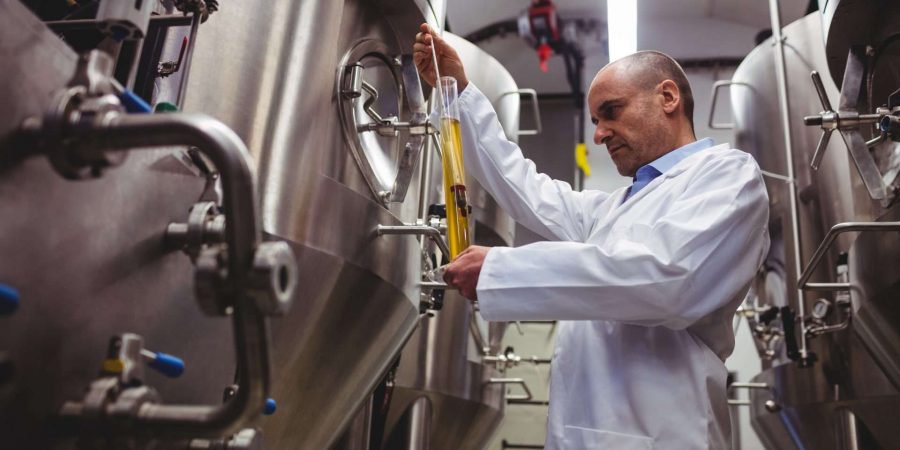 Plato Gravity Scale is a measurement of the concentration of dissolved solids in a brewery wort. Degrees Plato (°P) is used to quantify the concentration of extract (mainly sugars derived from malt but also including other soluble material in wort) as a percentage by weight. A 10°P wort will contain 10 g of extract per 100 g of wort. The measurement of wort gravity is important to brewers in that it is an indicator of the potential alcoholic strength of the beer. As a very rough guide, every 1°P generates approximately 0.4% alcohol by volume—a 12°P wort will produce an average of approximately 5% alcohol by volume, depending on the extent to which sugars are fermented out. 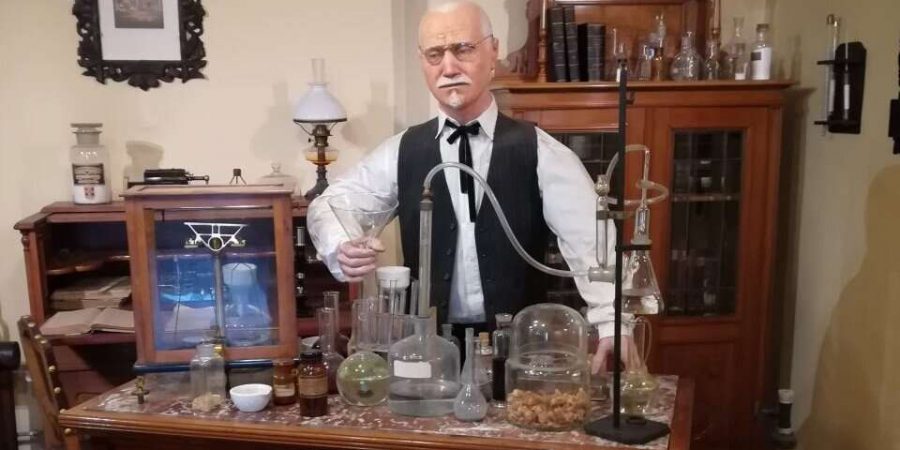 Balling Scale is a measurement (expressed as °Balling) of the concentration of dissolved solids (mainly sugars) in a brewery wort. The concentration of dissolved sugars in the wort is an indicator of the potential alcoholic strength of the beer, as it is those sugars that the yeast will ferment into alcohol. The solids concentration can be measured most simply by using a hydrometer, an instrument used for measuring the specific gravity of a liquid (see hydrometer). Alternatively, the solids concentration of wort can be measured using a refractometer, an instrument for measuring the refractive index of a liquid.

The measurement scale was devised by the German chemist Karl Balling, who in 1843 established a set of tables relating the weight percentage of sucrose solutions to the specific gravity of the solution at a temperature of 17.5°C (63.5°F). The Balling scale has been largely superseded by the Brix and Plato scales, although all three scales are essentially the same. 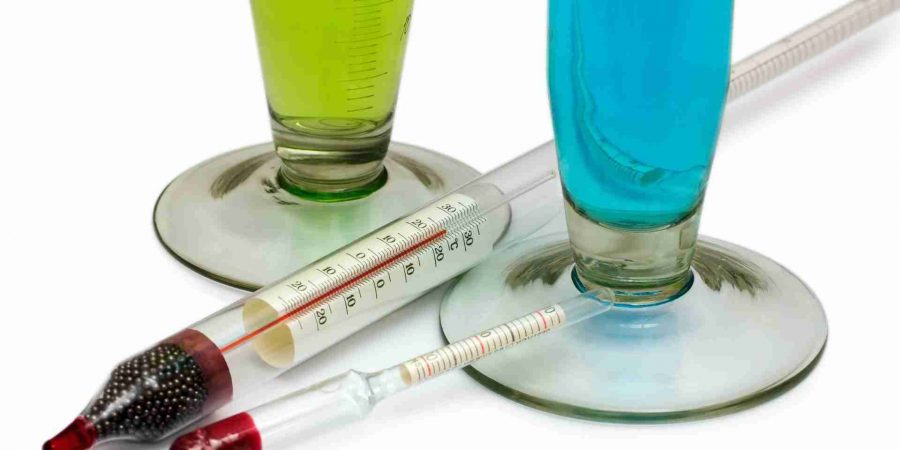 Hydrometers are usually constructed of glass or plastic. They often have a cylindrical stem with a measurement scale sealed inside and a carefully weighted bulb to make it float upright. In use, the hydrometer is gently lowered into the liquid until it floats freely. The reading is taken at the point where the surface of the liquid (the meniscus) crosses the scale on the stem of the hydrometer.

One important point to note is that whatever the unit of measure, the hydrometer scale is only valid at one particular temperature. Hence, they must be used in conjunction with a thermometer, and any variation from the reference temperature must be noted and compensated for.

A refractometer is an optical instrument designed to measure the concentration or mixture ratio of water soluble fluids. It measures refractive index, the speed at which light passes through a liquid. The denser the liquid the slower the light will travel through it, and the higher its reading will be on the refractometer.

Like hydrometers, many different scales are available that convert refractive index into a unit of measure that is more meaningful, i.e., Brix, specific gravity, °Plato, etc.

In large breweries the entire production can be monitored from any location in the plant. At various stages density measurements (Extract, °Plato, SG) serve specific functions, for example:

Wort is boiled in the kettle. Hops are added for aroma, flavor, and stability. During the boiling process, various chemical and technical reactions take place, including sterilization of the wort. Measurement, optimizes the boiling efficiency, saves energy, reduces the boiling time

Density measurement before or after the whirlpool optimizes the separation efficiency of wort from trub.